The country of Issia is located in eastern Tahanan on the coast of the Sea of Parn. Its capital is the port city of Kinijil on Thia’s Ribbon river. It is surrounded by Rubista, Sanjin, Irongut’s Stand and The Barrier, a largely impassable mountain range. 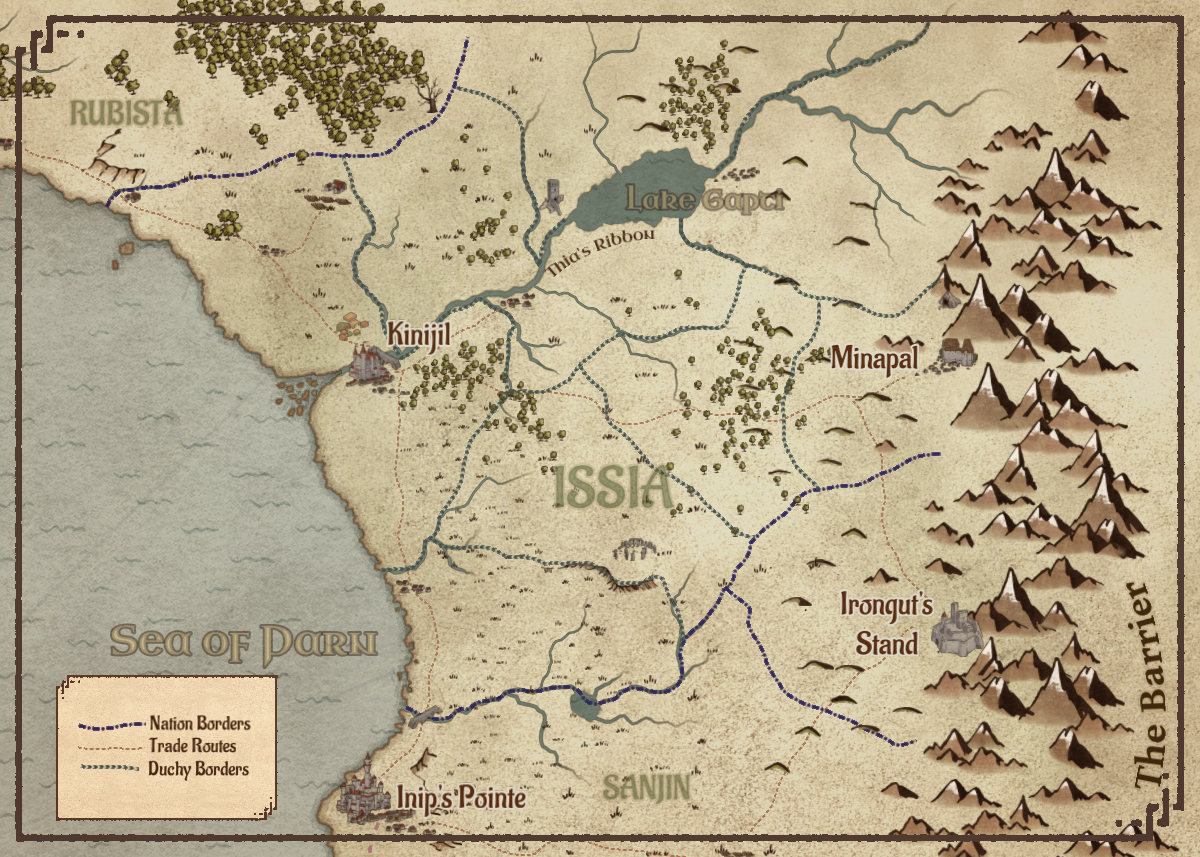 Issia’s political structure is relatively stable, particularly compared to its neighbors. The ruling family, Dayal, has been in power for more than 250 years. The current ruler, King Jakiz Dayal IV, has been in power for 23 years and is focused on building the country via peaceful trade. His father King Jakiz Dayal III, was much more aggressive and spread Issia’s borders south, taking land from Sanjin. The Sanjini still hold a grudge about losing that territory, but they have much larger problems than a currently peaceful Issia.

While there is a council and prime minister who advise King Jakiz, each province is controlled by a duke who has broad authority. While Jakiz controls one province directly, the others fall under his Dukes’ authority.

The nation is fairly large and there are a number of peoples and cultures that call it home. Most who live there are swarthy with dark hair and eyes. They worship many gods, but Celis, The Leopard Goddess, and Azalt are the most common.

Most people wear loose robes and tunics of linen during the hot summer months and woolen and goatskin garb in the areas that get cold in the winter. There is not a strong nudity taboo in Issia, and shared bathing areas are common.

Adornment with ear and facial piercings is a common theme amongst both men and women, however most of this jewelry has a simple and clean aesthetic.

The most commonly spoken language in Issia is Amurrun, however most traders and the educated speak common fluently.

Humans hold most, but not all, of the positions in the nobility and most of the culture of Issia is derived from a blending of human traditions from the north and south.

Ysoki(ratfolk) and Goblins are considered troublesome by most, but there are many who outright despise these races and treat them with disgust.

Than Lan are not permitted to live within Issia’s borders after many attempts to overthrow Issia’s ruling family via varied means over the centuries. They may come and trade, and there is a semi-permanent bazaar of tents where they congregate outside of Kinijil.

Other than the northern parts of Issia, the land is fairly dry and rocky. As such, many crops do not grow well. The land is not so arid that growing crops is impossible, but meat (often goat) is a major staple of the diet of most people in Issia.

Issia’s summers are hot and dusty, and its winters are cool and swap between dusty and muddy.