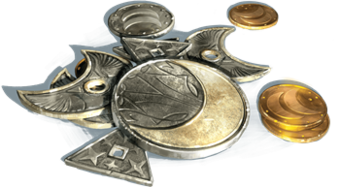 The Goddess of Coin is a popular deity in most coinage-based societies in Tahanan. While she values society and the structure it brings as necessary to the creation and maintenance of coinage, she is beloved by scoundrels and the honest alike.

Her church can be found in most cities. The more a societies wealth is related to trading, the more likely her church has powerful influence.

No one knows when she ascended or even what her initial race was, but when she appears, she generally presents herself as a woman of a race common to that location in staid robes. There are rumors that she occasionally appears as a pirate or thief in black garb, but her church denies those reports as scurrilous.

She has no specific symbol, though her temples generally have a large coin either illustrated or carved on their edifice. Most of her followers wear a coin on a chain or cord around their neck.