My father always had talked of beings of great power. The mind of a child can dream of hidden entities of light and dark wielding and destroying worlds in whims of thought. Vesmir, Cora of the inner Pel, of the Tarilin, had lectured on beings as such, keepers of great power that existed in our world, other planes, and those existed beyond those known world and planes. These tales Vesmir, my father, told me serve as laying the foundation to who I am, what I have become, and I suspect who I will be.

On some small scale growing up in Osina, I have had a unique experience of being an oddity. Sure there were Half-Elves but there were too few for my liking and led to me never quite feeling at home. My mother did not live with us and I had not seen her in the last 10 years. What I did have though was plenty of education by one of the finest teachers of the Tarilin, my father, Vesmir. I quickly found out that I did not have my father’s aptitude for his arcane art. My father could sense the potential but I was never able to perform the basic spells he had drilled into me. Eventually his expectations and my lack of aptitude collided into a father and son falling out that ended with me leaving the confines of Osina in a quest to find my mother, Treace of Longwatch, to rekindle our relationship.

I once asked my father how he had met my mother. He told me a tale of when he was younger he was a part of an envoy to Prism to meet with the lord of the Dwarves. During this trip his party discovered a ransacked caravan close to Longwatch. They decided to follow the tracks and found a group of Goblins in a cave some distance from the road. In that cave they found my mother whom the Goblins seemed to be saving for some horrific ending. My father said it wasn’t a heroic act but one of civility and honor to save those who needed saving. He fell in love with my mother as she was unlike any human woman that he had met. Later I came along and citing training and fostering a new position in the inner Pel, my father thought it best that I be taken to Osina. 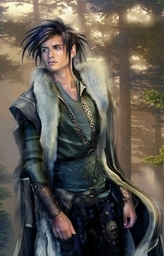