The young dwarf priestess by the name of Brianna has been the topic of much discussion among the priesthood of House Redforge. Though barely old enough to be considered an adult, Bri as she is commonly known comes from a long and prestigious line that has served as priests of the Great Mason for generations.

Bri’s grandfather was one of most renown priests and an adviser to the lord of the house for many years. While her father chose to serve the house as a soldier rather than a priest, seven uncles and three aunts also rose to prominent positions in the priesthood. Many wonder what the future holds for the young woman.

As it was, none of those discussions foresaw her being the last of her line and protector of the new young Lord Threnndar II 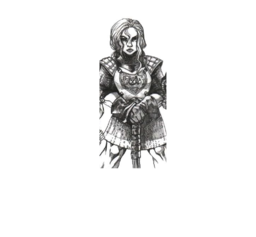