A swash-buckling cleric of Besmara

Alia is tall, and a handsome woman of Varisian descent. Her hair is thick and dark, eyes a brilliant green. She has a half-finished tattoo of a skull wrapped in chain along her left arm. Smaller tattoos of places she has been and things she has accomplished adorn her right.

Alia’s gear is well-kept: a shirt of mail, a rapier at her side, and a dagger with a bone handle from which she will never be parted. The grip of which was carved by her father from his amputated left leg. It is wrapped in intricate carvings of pirates looting and warring on the seas.

She is generally loyal during a job, but has few qualms about conflict with former allies.

She can usually be found anywhere drinks can be had, and is the loud boorish one singing off-key.

Alia Zitain was born in Stormward in 4966AU. Her family consisted of her father, Bazan, her older brother, Calan, and her mother, Jaya, who died giving birth to Alia. She was raised on the docks, spending much of her time with her aunt and uncle, Kalya and Born, as her father was a sailor. While he did sail, and sometimes hired on as a legitimate hand, most of the time, Bazan was a pirate, and well-known, and respected, among pirate crews.

One day, when he was ashore, Bazan got in a bar-fight with a handful of marines. In the fight, his left leg was so badly damaged, that it eventually needed to be amputated. All the marines either went missing or were found dead over the course of the next few weeks. Bazan stopped sailing and became a net-maker and a wood-carver on the docks of Stormward. Alia spent most of her time playing about the docks or listening to stories as her father worked. Many of these stories told the tales of the Pirate Queen, Besmara, and her many adventurers on the astral seas, raiding the lands of the other gods.

When she was about fourteen, Bazan got an infection in his lungs and died. Calan went to sea and Alia went to live permanently with her aunt and uncle, who by this point had moved to Sandpoint. About a year later, Calan went missing, presumed lost at sea.

By sixteen, Alia was a sailor, and sometimes pirate, herself. Her father’s name got her the chance, and she took it. She sailed the Cloven Coast, sometimes legitimately, sometimes in search of booty, and was fairly content, though she did still wish to know what had happened to her brother. Sometime in 4987AU, she was on the Wavedancer, which had just raided some villages along the coast, when they ran afoul of the Stormward navy. The ship sank, and Alia was left adfrift, at least a day’s swim from shore. She prayed to Besmara that she make it, offering her soul in death. In life, she offered a lifetime of drinking, brawling, and looting, all in Besmara’s name, if she made it ashore. Whether it was fate, chance, or Besmara’s hand, Alia never knew, but she kept her word, and devoted her life to honoring her Goddess. 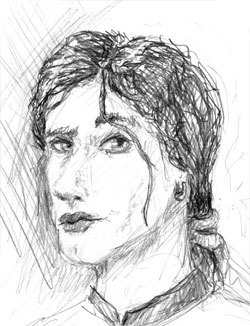